Stories from Company B 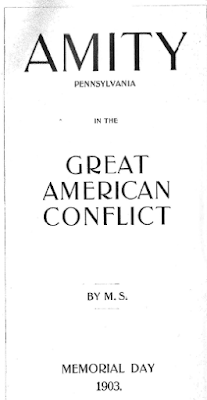 The title of this article is from a pamphlet written in 1903 to celebrate Memorial Day in Amity, a small community in Washington County, Pennsylvania. While doing research for my book, "Such Severe and Hard Service: The 85th Pennsylvania in the Civil War," I came across an online reference to this booklet. Margaret Farrabee of Amity generously emailed me a copy, and I was able to use several citations for my book.

The booklet was written early in the 20th century by 66-year old Manaen Sharp, who had served im Company B of the 85th Pennsylvania regiment. Sharp spent a year with the 85th before receiving a medical discharge. After the war, Sharp became a successful business man who owned furniture stores in Amity, Beallsville, and Little Washington, all in Washington County. He also served for a time as county treasurer. He died in 1920 at the age of 82 and is buried in Little Washington. His 1903 booklet chronicled the Civil War service of residents from the Amity area.

Sharp wrote a paragraph or two about 40 or so soldiers from Amity and the surrounding area, including several from his own Company B of the 85th. [Sharp also included soldiers from other regiments, including the 140th Pennsylvania, the 22nd Pennsylvania Cavalry, and the 1st West Virginia Cavalry]. In doing so, Sharp recounts a series of interesting stories about many of the soldiers. Undoubtedly, Sharp was present for at least some of the events he described. In other cases, he surely heard the stories as they were passed around the campfire. Some others he learned about after the war, perhaps at regimental reunions. Below, I have quoted Sharp [in italics] concerning several members of his company.

I have included some of my own comments in red.

CHRISTOPHER ANDERSON: At the battle of Fair Oaks, while aiming his gun, it was hit between his hands and disabled. He reached for the gun of a dead comrade and used it to good purpose.Anderson returned home from the war. He died in 1877,

WILLIAM BRADEN: When driven back at Fair Oaks [Seven Pines], Comrade Braden was helping to carry his wounded captain [George H. Hooker] to save him from capture. The comrade, J.F. Speer of Canonsburg who was assisting, heard the sickening thud of a minie ball strike Comrade Braden, who said, 'I am hit.' He staggered to the road side and that is all that is known. He is buried among the unknown, but where?
This story is confirmed by Captain Hooker, who wrote a letter in the pension file for Braden's widow, Nancy. “I hereby certify that Wm. Braden, a private of Company B 85th Pa. Vols, was shot while assisting me from the field at the Battle of Fair Oaks [Seven Pines] Virginia on the 31st day of May, 1862. He fell severely wounded and is supposed to have died from the effects of his wound.”

CYRUS [JOSIAH] BRATTON: His grave is on Morris Island, S.C....The autumn of 1863, he was excused from duty on account of sickness, but stayed in his quarters; his discharge papers were signed and with high hopes he expected to start for home in the morning. His messmate got breakfast and went to awaken him and found him in the sleep that knows no waking.
Bratton died of chronic diarrhea at age 25.
JOHN CLAYTON: He was mortally wounded at Deep Bottom and taken to the hospital at Fortress Monroe where he died and is buried in the cemetery at the fort. At the Battle of Kingston [Kinston, NC] in loading his piece, he spilled the powder but rammed the bullet. He sat down where he stood in the battle line, unbreeched his gun, took out the ball, put his piece together, reloaded, putting in both balls with the remark, 'I will try and ring two of them this time.'
Clayton died from a gunshot wound to the thigh. He is buried in Hampton National Cemetery.
LEONARD HAMMERS: In his performance of duty he had many narrow escape[s]. Only once did he lose hope -- that was when with others he was ordered to Morris Island to spike the guns of Battery Gregg. this battery could be swept by every fort in the harbor defences of Charleston. When they tied a strip of white on the left arm of this detail, so as to distinguish them from the Confederates in the darkness, hope left him but courage never. When the rebel guard discovered them and gave the alarm, the marries manning the boats refused to land, so the attack was not make.

Hammers enlisted at age 17. His first child was born while he was away in the army. He and his wife, Charlotte, had five more children after the war. He died in 1904 and is buried in Amity. I wrote about the attempts to take Battery Gregg here.

ABRAHAM IAMS: This young man took my place in the center of Co. B when I was taken to the hospital. He was mortally wounded at Fair Oaks, shot through the right breast and lay on the battlefield from Saturday afternoon until Monday afternoon when he was taken back to Savage Station. At 2 a.m. the next morning, in a down pour of rain, Robert Bair [James Robison Bair] put him on a train for White House [Landing, VA] where he died and is buried.

Corporal Iams was killed at the age of 25. He was survived by his parents, William and Delila, and his sister, Rachel.

DANIEL MILLER: Was badly wounded at Deep Bottom and was sent to the rear for repairs, [then] turned up in the hospital in New York. An order came to the effect that all soldiers who could walk to the railroad train would get furloughed. A comrade, James F. Speer, made him a pair of crutches. On these he started for the train, but had to rest many times before reaching it; but when seated in a comfortable car, contentment was seen all over his jolly face.

DAVID MILLER: Was slightly wounded on the first and also on the second day at Fair Oaks. At Kinston, while charging through a swamp [left] , he was badly hurt and was helped to solid ground by a comrade who, examining his wound found the ball had passed through a deck of playing cards and buried itself in his side. He died about 1898.

I wrote an article about Miller on this blog which can be found here. Sharp's observation about Miller being wounded on the second day at Seven Pines [Fair Oaks] is interesting because his regiment had been sent to the rear and had not been actively engaged in the fight that day.

HENRY TAYLOR REYNOLDS: Was killed June 14, 1864 near Richmond, Va. His body fell into the hands of the Confederates and was not recovered. He had a presentiment that he would not live out his time. A short time before he was killed, he applied for and obtained leave of absence to visit his old parents, as he believed, for the last time/

This story is confirmed by Oscar Lyons of Company B. I have included Reynolds' story in soon-to-be-published Volume II of my regimental history. Lyons wrote, "The boys tried to cheer him (Taylor) up, but the thought in his mind that he was soon to be killed could not be removed. On the 17th of June, we were in the rifle pits near Petersburg, on the North side of the Appomattox River... Many times through the day, Comrade Reynolds said he felt that his time had come; that he would never again see home or friends, for something told him that he was going to be killed."

JAMES SMITH: At the change of base by McClellan's army on the Peninsula it was necessary to destroy a bridge over the Chickahominy river. The engineers had failed to destroy it because of a hot fire from the rebel side. An appeal was made to men in the line. Comrade Smith was one to respond for this important but dangerous work. They destroyed the bridge, checking Stonewall Jackson's flank movement.

Smith attended the last reunion of the regiment in Brownsville, Fayette County in 1928. He died in 1930 at the age of 88.

MOSES SMITH: Served his full term but had the misfortune to serve the latter part of it in Andersonville prison. Comparatively few survived this prison life. He was wounded at Kinston Bridge, the ball first striking his gun glancing into his leg. At Bermuda Hundred, an old tobacco barns stood close to the rebel line and was used by the rebel sharpshooters. Comrade Smith and Dave Miller crawled to this barn and set it on fire, completely destroying it.

Moses Smith was the brother of James Smith. He was captured at Ware Bottom Church, Virginia on June 16, 1864 with two other members of the regiment while on picket duty. He survived Andersonville and lived until 1924.

SAMUEL WALTON: At Wier's [Ware] Bottom Church, while on picket duty, he was approached by a large grizzly unkempt rebel. Sam supposed he was coming in to surrender, as many of them at that time were doing, and was learning against a tree waiting to receive him. Imagine his surprise when the Johnnie fired, the ball striking the bark of the tree near his head, pieces of the bark stinging his face and neck. Comrade Walton did his duty at once. The rebel tried to reload his gun at once. The rebel tried to reload his gun after he was down and fatally wounded.

Walton enlisted as a private before being promoted to commissary sergeant.  He spent most of his postwar life in Greene County. He was involved in the lumber business and was the proprietor of S.M. Walton and Sons. He died in 1914 and is buried in Rices Landing, Greene County.

Stories from Company B

The title of this article is from a pamphlet written in 1903 to celebrate Memorial Day in Amity , a small community in Washi...