The last seven paragraphs of this entry is a lengthy quote from the 1867 book entitled "Prison Life" about the capture of Captain John E. Michener on Whitemarsh Island near Savannah, Georgia in 1864. Michener had spent the first 2 1/2 years of the war as a lieutenant in Company D of the 85th Pennsylvania. In early 1864, he was promoted to be captain of Company K. The Whitemarsh Expedition marked his first field command with his new company.

I earlier have written about Michener's captivity in an article for Military Images magazine entitled, "Following the Torn and Bloodstained Colors: John Michener's Civil War Odyssey." This article features letters from Michener and his family as well as newspaper accounts of his captivity, courtesy of descendant Margaret Thompson.

I have also written extensively about the Whitemarsh Island Expedition in my soon to be published Volume II history of the 85th Pennsylvania entitled, "Such Hard and Severe Service: The 85th Pennsylvania in the Civil War, 1864-1865" from by Monongahela Books.

The expedition landed successfully on February 22. Confederate pickets on the beachhead quickly fled with Michener and 20 men from his company (K) in hot pursuit. Michener was  under the command of Captain George Hooker, who was tasked with capturing a bridge between Whitemarsh and Oatland Islands and thus prevent the Confederates from sending re-enforcements.

Michener and his men made it across the bridge but were confronted with an earthwork with a small two-gun battery.

Guiding the Union mission were several escaped slaves from the area who knew the terrain. But the fugitives did not know of the battery that had been built since their escape.

Hooker's men halted their attempt to capture the Oatland Bridge. But as Simpson described, Michener and his sergeant from Company K, James C. Bailey, were trapped trying to re-cross the bridge. Near the interior of the island, another member of the 85th Pennsylvania, Private Eli F. ("Frank") Shallenberger of Company C, became separated from his Hughes' team and was also captured. Everyone in the expedition except for these three unfortunate captives were able to safely return to their boats and return to Hilton Head Island.

This account below, in Michener's words as told to author Simpson,  is somewhat critical of Captain Hooker for not sending expected re-enforcements in a timely manner to help Michener's men escape from the other side of the bridge.

"On the 21st of February, 1864, while the Florida campaign [Olustee] was in progress, General Joshua B. Howell, commanding the district [that consisted of] Hilton Head, St. Helena’s Island and Fort Pulaski, embarked from Hilton Head Island, with the Eighty-fifth Pennsylvania Volunteers and Fourth New Hampshire, for a small island about four miles distant from Savannah, Georgia known as White-Marsh Island. Upon this island some five hundred negroes were actively engaged in throwing up breastworks under the protection and supervision of about two hundred rebel troops. This island is about three miles wide and is connected with the main land by a wooden bridge. To destroy the [Oatland] bridge, so as to prevent succor from Savannah; attack and scatter or capture the rebel troops guarding the negroes; destroy the works and bring off these negroes to Hilton Head, were the objects of this expedition.

"The destruction of the bridge, the first and most important object to be accomplished, was assigned to companies B, D, E, H, I and K of the Eighty-fifth Pennsylvania Volunteers under the direction of Captain George H. Hooker, acting assistant adjutant general to General Howell. The transports arriving a short distance above Fort Pulaski, dropped anchor and launched the small boats for the above-mentioned detachment. These boats were designed to carry from twenty to thirty men, each but having been lying up in the hot sun for months at Hilton Head, they were wholly unfit for the service. Many of them filled with water as soon as launched, and sunk immediately, while the others were only kept afloat by constant bailing.

"This detachment was to proceed some three miles up a small sluggish creek and get in the rear of the enemy before the transports landed the remained of the troops at the front approaches to the island. It was long after midnight when the order 'cast off' was given and the tide coming in greatly assisted the strong but muffled paddles and caused the awkward and leaky boats to shoot through the water with astonishing rapidity.

"The night was calm – the 'wind slept soundly'—while the twinkling stars in the hazy sky relieved the midnight darkness. The moon at length peered above the horizon and shone with a mellow light as she travelled from cloud to cloud. The snake-like stream, stirred by the many muffled oars, sparkled on its winding way, lending a soft attraction to the gloomy marsh. Far along its grassy borders the tall, green seaweed formed beautiful arches, through which the silent moonbeams crept as if to smile upon those daring men as they noiselessly glided along in their frail boats…

"Arriving at the island, a dash was made for the shore, which was quickly gained without the loss of a man. The rebel picket only fired a single volley and then fled like frightened deer. Captain Hooker directed Captain Michener to deploy his company (K) as skirmishers – pursued the retreating pickets with all possible haste and gain the bridge before the alarm could spread among the enemy.

"After penetrating the dense timber and undergrowth for nearly a mile, Captain Michener came to a cleared field only a few hundred yards from the bridge. To his astonishment he discovered what appeared to be an earthwork but a few rods distant from the opposite end of the bridge. Halting for a moment, he sent his orderly sergeant back to confer with Captain Hooker and request him to come up. In a few moments this gallant officer arrived in company with Captain [Rolla] Phillips of Company D. they however doubted the fact of the enemy having a fortification there and agreed with the negro-guide (who had only escaped from the rebels a few weeks before) that it was only ‘earth-houses occupied by the colored folks,’ and Captain Hooker ordered Captain Michener to advance upon the bridge. Captain Michener still insisted that it was a battery and having only twenty men of his company with him asked for more men, stating that if he found it to be an earthwork when he arrived at the bridge, he would try and take it. Captain Hooker said it was not necessary, that he would support him.  ‘Yes’ responded Captain Phillips. ‘Michener, we will be at your heels.’ Captain Michener advanced at double-quick and on arriving at the bridge, discovered that his suspicions were correct and that the enemy had a small earthwork with one gun in position and the panic-stricken rebels trying to get up a second one. Believing to retreat would expose him to a close and galling fire and seeing but few rebels in the fort, he resolved to charge it. With a shout the gallant captain and his brave boys dashed towards the bridge, which was soon gained when the rebels opened upon them with one volley of grape, but the gun being too much depressed, the shot fell short and did no other damage other than to splinter a portion of  the bridge, a fragment of which struck Captain Michener, felling him to the ground. Quickly springing to hie feet, he dashed across the bridge with only ten men, the rest stopping short of the bride and seeking shelter from the shower of musketry concentrated upon them. With this immortal ten, Captain Michener pushed fearlessly up to within fifty yards of the earthwork; but finding no support coming up, as had been promised, he at once saw the folly of hurling those few devoted followers against the fort. Seeing a small embankment near the ditch to the left, he quickly deployed his men behind it and lying flat upon the ground, opened a brisk fire upon the enemy, killing one man and two horses. Here this little Spartan band fought bravely for more than an hour, waiting for reinforcements and not permitting a rebel to raise his head above the parapet. What an hour was that! Lying almost under the very shadow of the fort, with two guns and two hundred muskets concentrated upon them, how desperately they fought and how anxiously they looked for the promised supports. A half hour passes, the enemy is still held at bay, and now they listen for the shouts of their comrades rushing to the rescue. They load and fire again, rebels fall from the parapet; another half hour passes; the bloody strife continues, but no supports have arrived; the moment is big with danger; to advance is death, to retreat is almost hopeless, to remain longer in than position was certain destruction. Oh! That relief would come. They read each other’s thoughts in their anxious countenances; death is preferable to surrender, and a soldier’s glory is to fall, if fall he must, with his face to that foe.

"Lieutenant [Norman B.] Ream of Company H, a brave and gallant officer, had been ordered by Captain Hooker to hasten with his men to the aid of Captain Michener while he was thus being overpowered by the enemy. He had proceeded but a short distance, however, when he fell, severely wounded.  His comrades at once endeavored to carry him back to the boats, but were so hotly pursued by the rebels that the brave lieutenant requested them to lay him down and make their escape, saying it was better for him to fall into the hands of the enemy than for them all to be captured. They persistently refused, however, and finally succeeded in reaching the boats in safety with their noble but suffering leader.

"At length, despairing of aid and knowing the hopelessness of their condition, they resolved to attempt escape at least by crawling through the marsh to the stream and swimming to the bridge. They gain the bridge; the heroic spirit that had sustained them through the last dreadful hour now yields to excitement. Captain Michener entreats them to be calm and courageous, that they would either escape or die together. He orders them to cross over, one at a time, so as not to

draw the enemy’s fire and resolves himself to bring up the rear. The first crosses, safely, and then the second and the third, but the rebels have discovered the skillful maneuver; they make a flank movement and gain the abutment of the bridge just in time to intercept the captain and his last man, Corporal [James C.] Bailey. The captain might have escaped with the first that crossed the bride if he had consulted his own safety alone, but acting the part of a true soldier and unselfish commander, he determined to see his comrades safely over before fleeing himself from danger, and thus, on the 22nd day of February, 1864, fell into the hands of the enemy.”

NEXT: The early days of captivity for Michener, Bailey and Shallenberger. 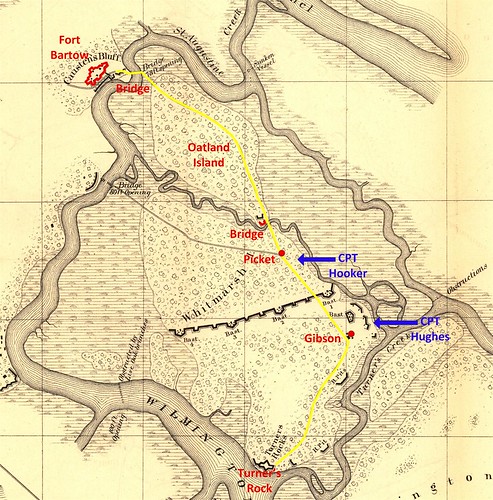