The 199th Pennsylvania Joins the Brigade

In October of 1864, about three-quarters of the men in the 85th Pennsylvania completed their three-year enlistment and prepared to return home to western Pennsylvania. They were removed from the front lines near the James River in Virginia and sent to Portsmouth, Virginia  for a month of relaxed duty before leaving the service.
About 150 of their comrades from their regiment remained on the front lines, either because they had re-enlisted or because they had joined the regiment after 1861 and still owed the government a year or so of service. These remaining men would play prominent roles in the Battle of Fort Gregg and the Appomattox Campaign in April of 1865.
The other three regiments in the brigade of the 85th PA had a more substantial number of men in remain in the service. In early 1864, many of these men from the 39th Illinois, 62nd Ohio and 67th Ohio had reenlisted. This brigade was designated as the First Brigade, First Division of the Army of the James.
Because of the departure of the men from the 85th PA, the brigade, temporarily led by Colonel Francis B. Pond of the 62nd Ohio,  was low in numbers. Therefore a new regiment, the 199th Pennsylvania, joined their ranks in Virginia. The 199th PA was composed of nearly 1,500 troops from around the state, including the counties of Philadelphia, Montgomery, Lancaster, Crawford, Allegheny, Lycoming, Wilkes-Barre, Dauphin and Lackawanna. They had enlisted for one year of military service in the fall of 1864.

The 199th PA was led by Colonel James (later Joseph) C. Briscoe, He born in Ireland and had served as a staff officer for Generals Phillip Kearney and David Birney.  Meanwhile, several  members of the 85th PA became officers in the 199th PA: Robert P. Hughes (Lieutenant Colonel), Oliver Sproul (First Lieutenant, Company H), Charles Eckels (Captain, Company K) and Walter Cravin (Captain, Company E).
On April 2, 1865, Union forces made a breakthrough against Confederate lines near Petersburg. In their first battle at Fort Gregg later that day, the 199th PA suffered 18 killed and 91 wounded. Colonel Briscoe was shot in the leg during the charge but continued towards Fort Gregg.
Briscoe's official report of the charge at Fort Gregg stated,  "About noon we received orders to attack and
carry the fort, and the whole line advanced, in good style. The ground in front of the southeast salient of the work forms a perfect natural glaces for about 300 yards; passing over this space my regiment suffered its severest loss-canister, shot, and minie bullets tore through the ranks, yet not a man faltered. I was struck down by a flanking ball about seventy-five yards from the work, and although I lost but a moment in recovering myself, the men were already in the moat and clambering up the exterior slope; were fighting hand to hand across the parapet, the enemy refusing to surrender, though surrounded on all sides. This sort of thing lasted nearly twenty minutes, when we finally burst over the parapet and the fort was ours."
Lieutenant Oliver Sproul, the former 85th Pennsylvanian, planted the colors of the 39th Illinois on the wall of the fort. William Chick of the 85th PA claimed that this was the first of many Union flags planted on the parapet as the fort fell to the Union. Wrote Chick, "The first flag to reach the fort was the flag of the 39th Ill. The Color Bearer fell as he reached the ditch and First Lieut Oliver Sproul of the 199th Pa. grabbed the colors, mounted the parapet, and planted the flag." [National Tribune, Washington, DC, June 12, 1902]
Another account of Fort Gregg came from Private Jacob Etter of Company H. Etter wrote this tribute to his captain, John G. Bippus of Butler County, who like Briscoe was wounded in the charge upon the fort. "[You were] leading your command into action – that terrible charge on Fort Gregg, the key to the stronghold, Petersburg. I shall never forget it, nor my feelings as I picked you up and placed you in the ambulance [after a gunshot wound to the head], with the impression that you were mortally wounded…How any of us escaped to tell the tale of that day may only be attributed to Him who governs the universe and rules the stars, and who also directed the flying missiles. " (Butler Citizen,  August 7, 1878)
After Fort Gregg fell, General Robert E. Lee abandoned Richmond and Petersburg and headed west to escape pursuing Union armies. At Rice's Station, on the way to Appomattox, a brief fight left four men dead and eight wounded from the new regiment. In total during their brief service, the 199th PA lost 32 men to the battlefield and 52 to diseases.
Following the surrender at Appomattox, the 199th PA was encamped near Richmond and the men were mustered out two months later. [Frank H. Taylor, Philadelphia in the Civil War, 1913]
Because they were from counties from throughout the state, the 199th PA often held company reunions rather than trying to bring the entire regiment together. One such reunion was held in 1912 by Company K. For this get-together, Captain Charles E. Eckels, formerly of the 85th PA, traveled from West Brownsville in Washington County to meet his former soldiers in Lancaster County.
In his remarks to the company, Eckels said that, after the surrender at Appomattox, Company K was given the honor of guarding Union headquarters by General John Gibbon (Commander of the 24th Corps in the Army of the James) because of the company's strong appearance, discipline and training. [Williamsport [PA] Sun-Gazette, September 12, 1912]
The last surviving member of the 199th PA was Paul Albaugh from Meadville, Crawford County. He died in 1935.
at September 14, 2020

The 199th Pennsylvania Joins the Brigade 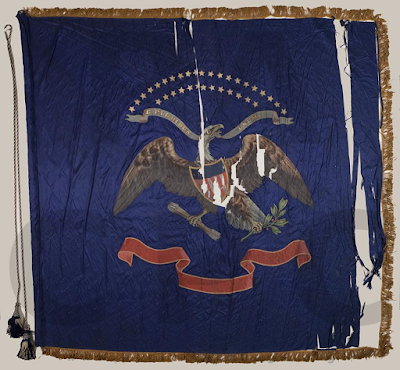