In my soon-to-be published Volume II history of the 85th Pennsylvania regiment, one chapter is devoted to the capture of Captain John E. Michener of Company K. Michener began the war as a lieutenant in Company D, the unit that included my great grandfather and his brother.

Michener participated in the Battle of Seven Pines (VA) in 1862 and siege operations around Charleston, SC in 1863. In early 1864, he was promoted to captain of Company K. But in February of 1864, Michener was taken prisoner along with two other members of his regiment on Whitemarsh Island near Savannah, GA and held in captivity by the Confederates for ten months before being exchanged.

I  wrote of Michener's period of captivity for Military Images magazine in an article entitled, "Following the Torn and Blood-Stained Colors: John Michener's Civil War Odyssey." The author is grateful to Michener descendant Margaret Thompson for providing family letters that were written that form the basis of above article as well as the chapter of my book.

While researching the regiment, the author came across a letter written by Michener that appeared in a Pennsylvania newspaper in late 1879. Michener's letter was in response to an event that made national news; a South Carolinian names Thomas J. Butler travelled to New York City for a series of paid demonstrations in which his trained dogs were used to capture fugitive slaves and later escaped Union prisoners during the Civil War. Michener's newspaper letter was a response to this Butler's comments. More on that later.

In his 1879 letter, Michener disclosed a wartime escape attempt from a train by himself and five other Union officers whom he lists by surname. The author was able to identify two of these fellow officers: Colonel John Azor Kellogg of the 6th Wisconsin and Navy Paymaster Luther Guiteau Billings. Billings was later promoted to read admiral and in a 20th century news article, gave a brief summary of the escape attempt. [the other three escapees were described by Michener as Ensign Stoner of New York, Ensign Smith who later settled in Washington, DC, and Lieutenant Brooks, who became an editor with the National Republican newspaper in Washington, DC]

Even though Michener's book has not been found, Colonel Kellogg wrote a detailed summary of the escape attempt that he entitled, "Capture and Escape: A Narrative of Army and Prison Life." . It was published in 1908, twenty-five years after Kellogg's death.

Michener briefly described the escape in his 1879 letter, "During the night of the 27th of July, 1864, me and several hundred of my brother officers were being transported from Macon, Ga., to Charleston, S.C.,, and escaped to the swamp, through which we hardly thought an alligator could have followed us. Late in the afternoon of the second day, however, we heard the deep baying of dogs which we held off with stout clubs until the two fiendish owners had called them off."  [Pittsburgh Commercial, reprinted in the Lancaster (PA), Examiner, November 5, 1879, page 5]

In his equally short version for an interview more than 50 years later, Luther Billings remembered, "Once during my imprisonment, with some other men, I managed to break out and we headed toward the coast, hoping to reach the Union fleet. we came to a swamp three miles wide and struggled through it, swimming, wading through mud, dodging snakes, and when, after five hours' toll, we got through, we were captured by a posse of Confederates with hounds." [Baltimore Sun, February 17, 1918, page 46]

Then in October of 1879, John Thomas Butler of Hamburg, SC, travelled to New York City with his pack of dogs for the purpose of demonstrating how the animals were used to track down fugitive slaves. Butler's expressed purpose, in addition to making money from the exhibition, was to show people in the North that the process of capturing fugitives was relatively humane and that the purpose of the dogs was to track runaways, not attack them.

Said Butler, "I wanted to travel a little and brought these dogs along to pay my expenses and to show you all at the north that we are not quite as bad as we are said to be."

Another New York newspaper quoted Butler at stating: "Slave-tracking has been ever since I remember a great business in the South. Slaves going over fences and through swamps for more than 300 miles have been successfully pursued by these hounds, but they are all trained to a nicety and never will do harm except by order of their master." [from the New York Herald, October 5, 1879]

[Butler was evasive when asked if he had used his dogs or otherwise taken part in the so-called Hamburg (SC) Massacre in in 1876. In this event, six blacks and one white were killed. Four of the deceased blacks were hanged. A group of about 200 armed whites attempted to disarm 38 members of a black militia in the predominantly black community near the end of the Reconstruction era.]

Butler came to New York City with an African-American named Sam Britton who performed the role of a runaway slave. Britton's task was to escape on horseback and on foot, and then wait for Butler's dogs to track him down.

One newspaper described the exhibition: "Reaching the gate, Sam consented to be 'treed' and mounting the high gate-post, awaited the hounds. When they found him they redoubled their noise and leaped high into the air, trying to reach the negro, who beat them off with his whip, until Mr. Butler came up and sounded his horn, at which the barking ceased as if by magic and the fugitive withdrawn. Mr. Butler says the dogs would have bitten the negro, well as they knew him, had he descended before the horn sounded, unless he had a club with which to beat them off. The moral seemed to be that a runaway slave must be careful to have a tree handy when the dogs overtook him, or, if he is caught in a swamp, he should be able tot cut a hickory stick in season." [New  York Tribune, reprinted in the Pittsburgh Commercial Gazette, 10-18-1879, page 2]

According to the New York Times, Butler's dogs were not ferocious looking. "the dogs were meek and mild little fox-hounds, of the kind that could hardly frighten anything larger than a rapid. Colonel Butler said they were the only kind every used in the South for tracking negroes and that they were not bloodhounds...They looked very sleek and neat, also looked as if a man with a good nerve and a heavy pair of boots could easily overcome their alleged ferocity." [reprinted in the Buffalo Morning Express, 10-13, 1879, page 2]

Michener read of Butler's comments and became enraged.  His experience as a prisoner and escapee that that the dogs were not as benign as Butler described. "Before starting on our weary march back to that dreaded imprisonment this Mr. Butler took occasion to say: 'It's a good thing for youuns that our catch dogs gave out half a mile back here, for I reckon they'd a tored youuns up 'fore weuns got thar.'" [Michener presumed his captor was not Thomas J. Butler, who would have been about 21 years old at the time, but a member of the extended Butler family.]

"I saw a Captain Holmes of St. Louis, Mo., a prisoner of war at Macon, Ga., in July, 1864, who had been fearfully mangled and torn by a catch dog in Alabama while he was trying to escape. I frequently saw two large South American blood-hounds outside of the stockade at Macon. At Andersonville, they had a large pack of blood-hounds.

"...when this other edition of the Butler family tells the Tribune reporter that they 'had and have no blood-hounds down thar in South Carolina,' I say, 'you lie, you villain, you lie.'"

Upon surrendering, Colonel Kellogg asked his captor if the dogs would have bitten the escapees had they not been called off. The captor smiled and said, "I reckon they might; right smart, too. I've seen them hounds eat [blacks], and I reckon they wouldn't know the difference atween them and you uns."

Kellogg's statement confirms John E. Michener's claim that using the hounds was not always humane, as Butler claimed in 1879, but that the dogs had the potential to bite, maim, and even kill the humans they were pursuing.

In his blog entitled, "Management of Negroes Upon Southern Estates," Toussaint Heywood has a post entitled "Track-dogs, catch-dogs and bloodhounds" that describes in detail the use of these animals to pursue and capture runaway slaves.

Kellogg, who had been wounded and captured at the Battle of the Wilderness in Virginia on May 5, 1864,  wrote his memoir in the early 1880's. Kellogg states the name of his pursuer in 1864 was named Davis, who may have been Butler's partner during the search. Kellogg alludes to Butler's visit to New York City in the following statement,  relating that there was a special observer among those at the New York City slave-catching demonstration in 1879.

",,,,this negro hunter,,,exhibited his pack of bloodhounds in New York City, and among those who attended the exhibition was my friend L.G. Billings. I should have supposed his curiosity would have been gratified in South Carolina."

Michener was not the only reader to dispute Butler's performance, although for different reasons. A South Carolina newspaper wrote of the event, "the stalwart Republican press has been heralding it abroad with the startling news that there are hounds of this character in every neighborhood through the South and that the poor negroes are chased and torn by them at the mercy and caprice of the lawless whites...it is a miserable falsehood." [The Intelligencer, Anderson, SC, 10-23-1979, page 3]

If Butler's main purpose was to make money, he apparently was successful. It was reported that Butler was paid well to join an acting troupe that was performing "Uncle Tom's Cabin." Butler's dogs were to be used in one of the scenes for dramatic effect. He also expressed hopes to tour the country and perhaps even Europe.

Upon being captured by Butler and Davis, Michener and his five fellow escapees were sent to prison at Charleston. Two months later, Kellogg attempted another escape. This time he travelled 350 miles and succeeded in reaching Union lines in Georgia. He rejoined his regiment and participated in the Battle of Five Forks near Petersburg, VA on April 1, 1865. Kellogg returned to Wisconsin and resumed the practice of law. He was elected to the Wisconsin state senate in 1878 and died five years later.

Later in life, Billings was promoted to rear admiral of the navy and served in three wars. He died in 1920 and is buried in Arlington National Cemetery. 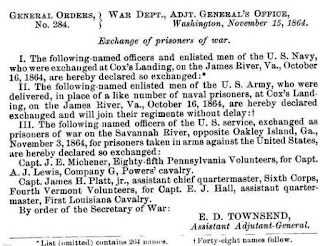 Captain John E. Michener was released as part of a prisoner exchange on the James River in Virginia on October 16, 1864 for Mississippi cavalry Captain Alonzo J. Lewis. Michener's letter to the newspaper concerning the track dogs was printed on November 5, 1879. He died four days later from a lung disease that perhaps the resulted from his confinement and escape attempt. He was 41 years old.

In my soon-to-be published Volume II history of the 85th Pennsylvania regiment, one chapter is devoted to the capture of Captain Jo... 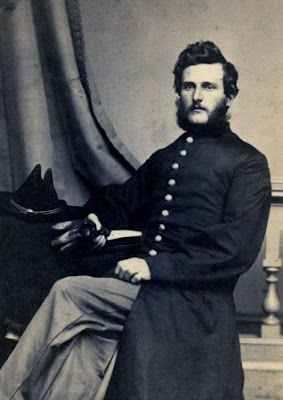