The anonymous poem below was contributed by a member of the 85th Pennsylvania for a reunion in 1885 held in Canonsburg, Washington County. This regimental reunion was held jointly with the 10th Pennsylvania Reserves.
First, some information about the reunion. A local newspaper noted of the event, "The town was in gay attire, the buildings being decked with flags, banners and evergreens. On the arrival of the 10:30 a.m. train from Pittsburgh, the visiting comrades were met at the station by the resident members of the regiments, and falling in line they all marched to the Jefferson Academy building..."
After several addresses, the veterans continued to the town's skating rink where a banquet dinner was served. At a campfire later in the day, Reverend Jacob L. Thompson, a veteran of Company A, shared some remarks. Another address was made by Alexander Pollock of Company A entitled, "Our Country: The Best Government on Earth." Reverend James S. Speer, a veteran of Company B also made a speech entitled, "Our Absent Comrades."
During their stay at Fort Good Hope in the District of Columbia during the winter of 1861-1862, the regiment constructed its own fortification (one of 33 that ringed the nation's capital during the war)  and performed duties at several other facilities in the vicinity. Fort Good Hope was located across the eastern branch of the Potomac River, in the southwest corner of Washington, DC near the border with Prince Georges County, Maryland. When they had time, the men would tour the nation's capital. Several claimed to have encountered President Abraham Lincoln near the Capitol Building on various occasions.
The poem,written during the 85th Pennsylvania's third month in Washington, DC and sixth overall in the army, reflects the writer's homesickness, restlessness in not yet having participated in battle, and frustration with the cold winter weather. 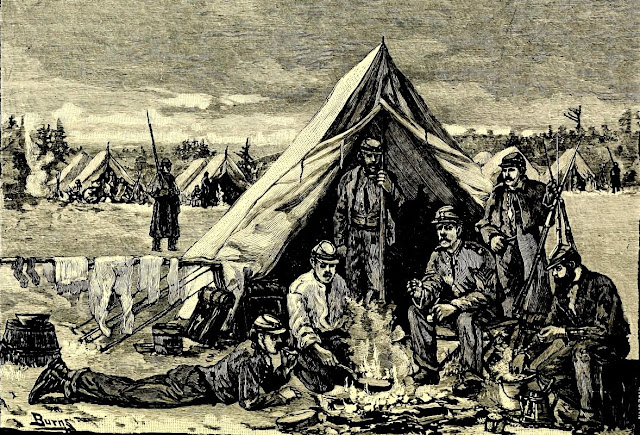 WINTER IN CAMP
The following lines were written by a member of Company E, 85th regiment PA. Vols. In February, 1862, at Camp Good Hope, Washington, D.C. and are handed us with a request to publish,

Alas the pleasant days have fled,
The rude storm king has come,
And I’m nodding in my canvass bunk,
With thoughts of “Home” sweet home.

I’m nodding by my friends,
The snow falls thick and fast,
And I’m thinking of the joy’d ones left
And happy hours we’ve passed.

I’m thinking of the little ones,
Now distant many miles,
Their childish glee, their numerous pranks,
Their tears and gentle smiles.

I’m thinking of the good things too,
Roasts, jellies, cakes and cream,
But oh! Alas such dainty things,
In camp are seldom seen.

I’m thinking of the merry dance,
I see each fairy form
As gracefully they promenade,
And smiling partners turn.

The glorious orb of day is hid,
Nor sheds its genial heat,
To cheer the shivering sentinel,
While on his lonely beat.

The silver moon, the twinkling stars,
With clouds are overcast,
And each in haste a shelter seeks,
To shield him from the storm.

And still the storm king rages on,
With unrelenting will,
As though it were his chief delight,
Our icy cups to fill,

The rain, the hail, the sleet and snow,
Continue to descend,
Old Boreas blows his bitter blast,
That seem to have no end.

But cease complaint, my country calls,
Away with idle thought,
We came to save the stars and stripes,
Our fathers dearly bought.

No blood yet trickling from our feet,
We’re amply clothed and fed,
‘Twas not so with our noble sires
When forth to battle led.

Their footsteps left a bloody path,
As o’er the clods they passed,
Undaunted still they forward pressed,
To triumph at the last.

Though kinds and crowns may threaten us,
Though wild rebellion rolls,
Undaunted by our flag we’ll stand,
Or sleep beneath its folds.

Then comrades on with heart and hand,
We’ll show the gazing world.
While life and through and being lasts,
Our flag remains unfurled.

When limbs are stiff and ache with toil,
The cure lies in St. Jacobs Oil.

Medal of Honor Recipients in the 85th PA

LOC         For their actions during the Civil War, three members of the 85th Pennsylvania regiment were awarded Congressional Me... 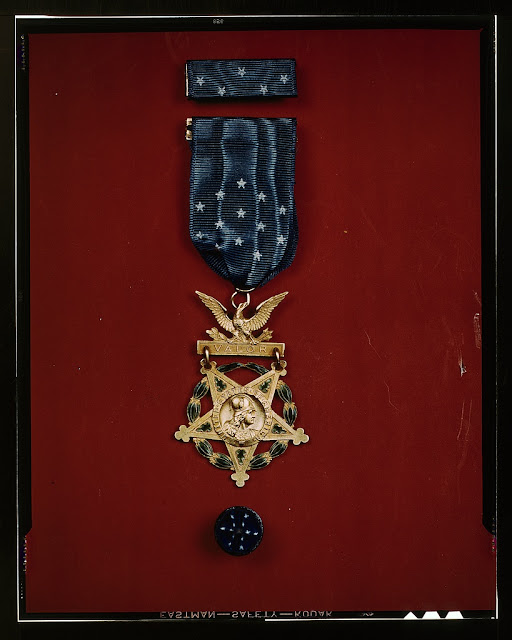