"It was Braddock's defeat after the lapse of a century"

Included in an 1882 book entitled, History of Fayette County, Pennsylvania is a group of brief biographies of prominent county citizens. One of those profiles was for the late Joshua Blackwood Howell, the colonel of the 85th Pennsylvania regiment. Howell was a leading attorney in Uniontown, PA prior to the Civil War. He suffered from a concussion on Morris Island, South Carolina in 1863 while commanding trench operations. The next year, 1864, Howell died as the result of a fall from his horse while stationed in Virginia.
In Howell's biographical entry from the book about Fayette County is this tantalizing passage concerning Union General Truman Seymour's ill-fated Florida expedition in February of 1864, resulting in the disastrous loss at the Battle of Olustee:

"He [Howell] was ordered with his brigade to Hilton Head [SC] to relieve Gen. [Truman] Seymour, in command of that district....Seymour had been ordered to Florida in command of that unfortunate expedition which resulted in the disaster of Olustee, upon the occasion of which he publicly remarked, 'This would not have occurred if I had Howell and his gallant boys with me.'"

The purported Seymour quote heaped praise on Howell's "gallant boys," which probably meant the 85th Pennsylvania and the rest of Howell's brigade that included the 39th Illinois, 62nd Ohio and 67th Ohio. But is it true?
If correct,  it is also a rather startling admission from Seymour, whose nearly 2,000 casualties and a 34% casualty rate at Olustee was staggering. Could Howell's command really have made a difference in the face of such huge losses?
Also, one must ask, who or what is source for this comment? The History of Fayette County, Pennsylvania was published eighteen years after the battle. The work was edited by Franklin Ellis, but the author(s) of the individual biographies of the prominent residents is not disclosed.
Under what circumstance could Seymour have made such a statement? Was it part of an interview?  Was it immediate frustration expressed upon his return to South Carolina?  Perhaps he said it to praise Howell on the occasion of Howell's untimely death later that year (1864).
If Seymour thought so highly of Howell's men, why was Howell's brigade left on Hilton Head Island for the Florida campaign? The reason is that many men in his brigade had been rewarded with  30-day furloughs to travel back home because they had extended their enlistment past the original three-year commitment.
Ironically, Howell's own regiment, the 85th Pennsylvania, did not re-enroll enough soldiers to be called a veteran volunteer regiment; the other three regiments in Howell's brigade did earn the distinction. In a subject covered in my book about the 85th Pennsylvania, Such Severe and Hard Service, most men in the 85th PA deplored the leadership style of Lieutenant Colonel Edward Campbell and refused to extend their service.
The next question is: Did Seymour actually make the "public" statement that he would have been victorious at Olustee if Howell's brigade had been there with him? After an extensive internet search, I could find this quotation by Seymour. This does not mean that the statement was not made, only that I could not find it. I would like to invite a reader to contact me if he/she finds evidence that Seymour actually made the statement.
However, the next question is: Could Seymour have made this statement? I believe the answer is yes.
By the start of 1864, Howell's brigade had established a sturdy reputation. They had been unfairly disparaged by George B. McClellan at Seven Pines (VA) in 1862, but played a key role during the Goldsboro Expedition later that year, and had survived onerous trench digging duties on Morris Island (SC) in 1863, suffering more casualties than any other Union regiment stationed on the island. The other three regiments had all fought well in the west before coming under Howell's command in early 1863.
The goals of Seymour's Florida expedition were to disrupt Confederate supply lines, search for prospective black troops, and perhaps coax the state away from supporting the Confederacy. After several movements against little opposition, Seymour decided to move inland towards the state capital at Tallahassee. He set out towards the interior of the state with 5,500 men. At Olustee, he met an entrenched Confederate force of 5000 under the command of Irish-born Brigadier General Joseph Finegan.
One key regiment in  the Union assault was the 7th New Hampshire, a quality regiment that had just added 300 new draftees and enlistees. Their inexperience helped cause them to break and retreat at a key moment in the Olustee fight.
In his official report five days after the battle to his superior, Quincy Gillmore, Seymour wrote:

"The colored troops behaved creditably—the Fifty-fourth Massachusetts and First North Carolina like veterans. It was not in their conduct that can be found the chief cause of failure, but in the unanticipated yielding of a white regiment from which there was every reason to expect noble service, and at a moment when everything depended upon its firmness. The misfortune arose, doubtless, from this regiment having lately been filled with conscripts and substitutes, of a very inferior class. The issue, so finely drawn that the battle was nearly equal to its very close, the enemy's losses as heavy as my own, ground firmly held to the last, the admirable temper of the command all indicate that but for the disparity arising from the causes indicated, this might fairly have been a victory."

Seymour undoubtedly was referring to the 7th New Hampshire as the "white regiment" that unexpectedly yielded.
Two weeks after the battle, a letter from an anonymous soldier in the 7th New Hampshire appeared in the Boston Herald (March 4, 1864). The soldier noted that his regiment had earlier been furnished with new Spencer carbine rifles. But prior to the Florida expedition, these weapons were taken away, replaced with damaged muskets that often did not function. Many lacked ramrods; all lacked bayonets. Referring to 300 new additions to his regiment, the soldier noted that many were German and French Canadians substitutes who spoke no English.

Seymour made his share of mistakes at Olustee. He advanced inland against Gillmore's orders. He misjudged the size and make-up of his opposition. He fed his regiments into the battle in piecemeal fashion. Nonetheless, he may have thought the more experienced men of Howell's Brigade would have stood and fought, giving him a better chance of emerging victorious. His official report seemed to pin the blame on one regiment, the 7th New Hampshire. So he is on the record suggesting that one regiment or one brigade would have made the difference. Correct or not, I believe he could have made the statement about Howell's "gallant boys."

NOTE: The quote in the title  of this entry is from Joseph T. Wilson's The Black Phalanx; African American Soldiers In the War of Independence, The War of 1812, And The Civil War. It refers to the disastrous defeat of English General Edward Braddock in 1755 in western Pennsylvania during the French and Indian War.

Two Views of McClellan from Soldiers in the 85th PA 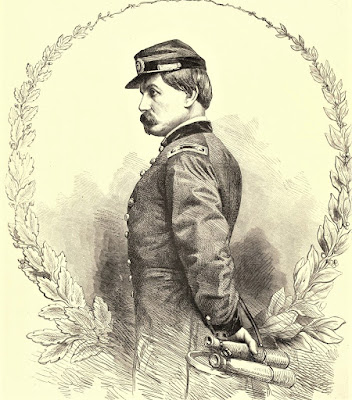